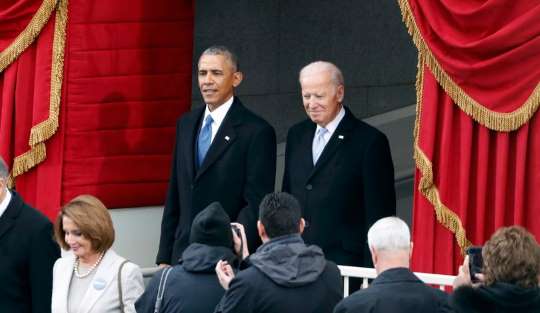 Joe Biden will be sworn in as the 46th President of the United States today in an inauguration ceremony with unprecedented security.

The 78-year-old will take the oath of office outside the Capitol Building but without hundreds of thousands of people lining the National Mall or predecessor Donald Trump watching on.

The sulking Trump is refusing to attend, becoming the fourth President to boycott his successor's inauguration, as he continues to peddle baseless claims that election fraud has robbed him of another four years in office.

Those lies helped incite the storming of the Capitol earlier this month by rioters, convinced that Trump's win had been stolen from the.

A heavy military presence is now in Washington DC as part of the beefed up security arrangements in the face of a 'very serious' threat of armed violence.

Those fears have led to the city's mayor urging Americans to watch the ceremony from home.

How to watch Joe Biden's inauguration

This includes BBC One, ITV1, BBC News and Sky News. Coverage begins at 4pm across those channels, although the news channels will have live build-up throughout the day.

All the major US news networks will also have live coverage.

The ceremony itself is due to start at 4.30pm UK time, 30 minutes before Biden himself takes the oath.

It will be possible to follow the inauguration on the Mirror too.

There is also a live blog running throughout Wednesday containing build-up and coverage of the inauguration itself, including a live stream.

Traditional celebrations such as the parade down Pennsylvania Avenue and the inaugural ball have also been cancelled in 2021.

In lieu of the ball, a 90-minute TV special called "Celebrating America" will be shown, and will "spotlight American heroes".

The newly sworn in President Biden and Vice President Kamala Harris will also speak during the show.

Many of the American news networks such as ABC, CBS, CNN, MSNBC and NBC will show the event in full, which will start at 1.30am UK time on Thursday.